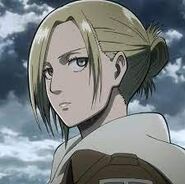 Annie Leonhart is a former antagonist in the anime and manga Attack On Titan. She was a member of the Warrior Program in Marley who inherited the Female Titan and joined her comrades Reiner Braun, Bertolt Hoover, and Marcel Galliard on the mission to infiltrate Paradis Island. Her main goal was to eliminate all the Eldians on Paradis Island, so she could go back to her father in Marley, and she ended up succeeding at the end of the manga.

Due to her harsh upbringing, Annie has become an isolated, exclusionary person; friendships do not come to her easily. She is rarely seen smiling and often has an emotionless expression. She is apathetic and somnolent, with little desire to put in any effort into meaningless disciplines or activities, and instead claims to focus exclusively on making it into the Military Police Brigade to obtain an easy life. While Annie tends to have a realistic outlook on life, she holds a fascination and even feelings of respect towards people who have a deep sense of duty and righteousness—people who devote their lives to and even die for causes they believe in. Annie's sense of humor tends to be mocking, sarcastic, deadpan, and surprising. It also sometimes expresses a partial truth, and it happens mostly in intense situations. For example, when she was cornered by the Survey Corps in front of an underground passage, she claimed that she was a feeble maiden and mocked Eren as a suicidal blockhead. Despite Annie's usually cold and calm demeanor, she is capable of expressing her feelings in various ways. At the times she does lose her composure, she usually reacts with violence. She beats up Reiner Braun for his cowardice after Marcel was eaten and for trying to manipulate her to continue a mission that had, in her view, already failed. Also, while exhausted by her spy work and constantly avoiding hand-to-hand combat training, Annie is angered when he pushes her to take the training seriously, to the point she uses her fighting style on him, despite his protests and her already having demonstrated it on Eren at Reiner's bidding. While outwardly callous, Annie has expressed levels of guilt and shock, most notably when apologizing to a certain corpse after the battle of Trost and when Reiner emotionally manipulated her to help him kill Marco. She is extremely practical and self-aware, being honest about her strengths and weaknesses, and is rarely ever prone to self-deception or emotional mistakes. A notable example is when she recognizes her lack of skill in seduction and charm when thinking about possibly seducing a member of the Fritz family, causing her to readily dismiss the idea. Furthermore, she had a casual acceptance of her negative personality traits, freely admitting her faults even to almost-complete strangers such as Marlowe Freudenberg, calling herself worthless and evil with no hint of self-loathing. She is nevertheless capable of self-loathing. For example, she proposed to Reiner Braun and Bertolt Hoover to get close to one of the men in the Fritz family and marry into it for the sake of her mission. She also claimed to be as selfish as the Marleyan government. After escaping her confinement, Annie undergoes a significant change in character, becoming more open about working with her former friends to stop the actions of Eren and the Yeagerists. She also freely acknowledges to Hitch that she has committed unforgivable acts, something Annie normally would have kept to herself. Later, as the Wall Titans ravage through Marley, she admits to Armin that she genuinely appreciated him visiting her for the four years she was enclosed inside her crystal. Annie also tells him she sees herself as nothing more than a monster.

Annie Leonhart first appeared in the second chapter of the Attack On Titan manga in 2009, titled "That Day."

That Day, Attack on Titan Volume 1

To see her father again (Succeeded)

In a hardened crystal (Formerly) Alive
She was first mentioned as one of the top 10 graduates of the 104th Training Corps, ranking 4th.

Hajime Isayama based Annie's first name off of the Japanese word Ani which means "older brother." Her surname Leonhart is derived from the Spanish word león and the Dutch word hart. The words combined translate to the nickname "Lionheart", meaning someone who's a great warrior.