Altiana is a heroine of Space Hunter.

It belongs to the ground commander. Cyborg age of 16-year-old girl. I wear pink bloomers type leotard on maroon long hair. Life gain system has a built-in, it can be converted to their power and life takes in bioenergetic the defeated enemy. The game basis, can be performed to recover a hidden items that exist on the item or stage that appeared to defeat the enemy. It is also possible to utilize captures various equipment hidden in each planet.

If there Also personality If "Altiana" ...

Once disappear, hip attack from crowded around behind the opponent. In addition, pursuit also possible with laser saber after the other party has fallen.

The burn burn the opponent from mouth wearing a flame.

Collected the rocks, and hit the opponent by remote control.

Collected a ball of water, and hit the opponent by remote control along with the Back Frip.

While the body is rotated at a high speed to disperse and spread the poison gas.

And hit the opponent by kicking a ball of ice. It is overhead kick when airborne. 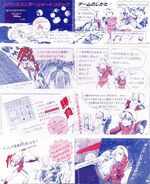 Space Hunter (FC) Playthrough
Add a photo to this gallery
Retrieved from "https://characters.fandom.com/wiki/Altiana?oldid=119792"
Community content is available under CC-BY-SA unless otherwise noted.