View source
This character has been used under the following names below. Navigate using the arrows or by clicking on a name listed on the navigation bar to jump to a specific character name you want to read.
Other characters for the Alarm Clock Bird | Next →
Alarm Clock Bird • Arthur • Birdie

The Alarm Clock Bird is briefly seen in the 1999 film The Adventures of Elmo in Grouchland. The small yellow bird pops out of Elmo's alarm clock, in cuckoo clock fashion, and hollers for him to wake up.

The Alarm Clock Bird puppet has also been used in various episodes of Sesame Street.

A full-body of the alarm clock bird 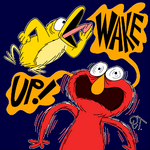 Opening To The Adventures Of Elmo In Grouchland UK 1998 DVD
Community content is available under CC-BY-SA unless otherwise noted.
Advertisement