Felix Agreste from the Ladybug PV

To protect Paris from Hawk Moth

Being locked up
Liars
Disappointing others

Cat Noir's staff
Adrien Agreste, known as Cat Noir is one of the main protagonists of Miraculous: Tales of Ladybug & Cat Noir. He is the son of Gabriel Agreste.

Adrien is the son of the famous fashion designer Gabriel Agreste. He models for his father's designs and his franchise.

Unknown to Adrien, Ladybug's civilian identity is Marinette Dupain-Cheng, whom he has a crush on.

As a result of him helping Wang Fu, he is given a ring known as the Cat Miraculous, which when worn grant Adrien the ability to transform into Cat Noir, his superhero alias.

As the holder of a Miraculous, Adrien is assisted by a small black creature resembling a cat called Plagg, who is a magical being known as a Kwami. As Cat Noir, Adrien's signature ability is destruction.

As Aqua Noir, he has aquatic abilities.

As Ice Cat, he is able to adapt to a world of ice.

As Astro Cat, he has space powers.

He is a student at College Francois Dupoir. As Cat Noir, he is a superhero who assists Ladybug on her missions. 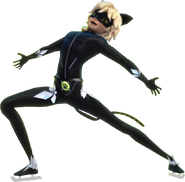 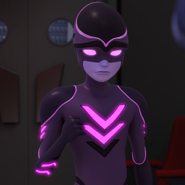