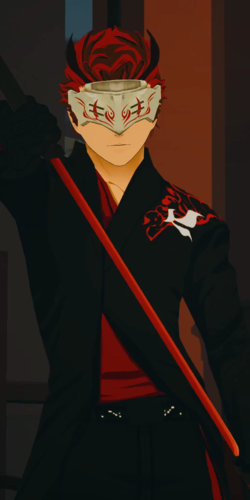 "What you want is impossible! But I understand because all I want is you, Blake. And as I set out upon this world and deliver the justice mankind so greatly deserves, I will make it my mission to destroy everything you love."

Adam Taurus is a supporting antagonist in the world of RWBY. He is a high-ranking member of the White Fang and both the mentor and former romantic partner of Blake Belladonna.

He is voiced by Garrett Hunter (English) and Yūichi Nakamura (Japanese).

Adam is a tall Faunus man with red hair that spikes backwards in a windswept way. While most of his hair is red, a portion of it in the back is brown. A noticeable trait of his appearance is the mask he wears, which obscures his eyes and upper face.

This mask is whitish-tan with red, Japanese style, flame-like symbols decorating the front, brown beast-like-ear pieces of cloth on the top of both sides, and two slits on each side, presumably to allow for vision. This may be a redesigned version of the Grimm masks typically worn by members of the White Fang.

Adam wears a long-sleeved black trench coat with slit sleeves and more red designs and a white symbol on the left side. His trench coat is red on the inside with red flame-like accents at the bottom and a large emblem on the back, with a white tulip design covered by a red rose design.

He wears long black pants and black shoes that are red on the bottom, and black gloves with more red emblems on their forehand, appearing to be a variant of the Greek letter Ω (Omega), the last letter in the Greek alphabet.

He wears a black belt with white domino marks on it. His appearance generally consists of black and red, similar to the color scheme used by Ruby Rose.

Not much is known about Adam's past or how he became affiliated with the White Fang. However, during his time in the group, he became the mentor of fellow member Blake Belladonna and formed a relationship with her. One night before a planned raid on a train, he is approached at his campground by Cinder Fall and her subordinates Emerald and Mercury; who proposed an alliance that she believed would benefit both groups. He immediately refuses her offer, as he did not want to risk the lives of his men for a 'human' cause, and demands that they leave. Following their departure, Blake approaches him and asks what they were discussing; to which he replies that it's unimportant and they must focus on preparing for the train.

In the "Black" Trailer, Adam and Blake stand atop a cliff waiting for the train to arrive. When the train is about to pass, Adam and Blake slide down the cliff and leap onto the roof of the train before opening up a panel and jumping inside. Adam and Blake then find themselves surrounded by a squad of Atlesian Knight-130s. Adam's katana, Wilt, shoots out of his sheath and hits one of the androids in the head, stunning it as he rushes forward and grabs his sword, before cutting it to pieces. The rest of the androids charge in to attack Blake and Adam, but the two easily defeat them as they make their way through the train and enter a cargo hold.

Adam looks inside one of the crates and tells Blake to move up to the next car while he sets the charges, having found the target. Blake asks about the people on the train, but Adam shows no concern for them. Just then a Spider Droid lowers itself from the ceiling and attacks the pair. The two unsuccessfully fight the droid and Adam is forced to save Blake when she is about to be stepped on.

The droid then fires a large blast that knocks both Adam and Blake onto a flatbed car. Adam tells Blake to keep it distracted while he prepares for an attack. Blake fights it off, but retreats behind Adam when the droid charges for an attack. Adam uses his sword to stop the blast, seemingly absorbing the energy from it, which he then uses to destroy the droid. When Adam turns around however, he sees Blake on the next car, and the latter says goodbye to him before separating the cars.

Following Blake's desertion, Adam decides to cease pursuit of her and put his focus on returning to Mistral. However, he is interrupted by Cinder Fall and her subordinates slaughtering all the White Fang members at his campground. Upon meeting them outside, Cinder once again reiterates her request for an alliance, offering Dust and funding to continue his operations, and threatens him with death should he reject it. Seeing no other choice, Adam is forced to accept the arrangement.

In "Breach", Adam is briefly seen following the Grimm invasion, conversing with Cinder Fall, Emerald Sustrai, and Mercury Black. When Mercury expresses doubt that the White Fang will listen to them again after the losses they suffered, Adam reassures the trio that the organization will listen to him.

In "PvP", Adam is seen in a Bullhead leading the White Fang in their assault on Beacon Academy. Adam then orders his troops to bring the humans to their knees before unleashing Grimm they've brought along with them.

In "Battle of Beacon", during the Grimm invasion, he was seen tossing aside an Atlas Soldier in Beacon's dining hall, when he notices Blake, calling her "his darling."

In "Heroes and Monsters", Adam is seen standing atop an Atlas student, asking Blake if she's going to run away again and calling her a coward. He then states that he wanted to "light the fires of revolution" with her, unsheathing his sword and preparing to stab the student. However, Blake intervenes at the last second, declaring she's not running this time. Adam kicks her away and disarms her with ease; angrily telling Blake that her dreams about equality and peace between Humans and Faunus are impossible. However, he understands this as all he wants is to be with Blake, something that is also impossible, and declares that he will punish Blake by destroying everything she loves. Upon hearing Yang call out Blake's name, he decides he will start his revenge with her.

He let's Yang witness him stabbing Blake in the abdomen, provoking her into an angry charge. However, Adam intercepts the attack and severs Yang's arm. He begins approaching Yang to finish her off, but Blake crawls in between them to protect her. Adam bemoans how Blake continues to hurt him before decapitating her - only to discover she created a clone to distract him and escape with Yang. Unfazed, Adam calmly disposes of an attacking Creep before leaving the area.

His whereabouts after Ruby defeated Cinder and the end of the Battle of Beacon are unknown.

In the months following the Fall of Beacon, Adam is identified as one of the perpetraitors and has used lethal force to avoid being arrested. In "Family", he appears in one of Yang's post traumatic stress-induced nightmares stalking her and eventually attacking showing that he still looms over Yang due to the scar that he caused her. In a meeting between Salem and her followers, she sends Hazel Rainart to meet with Sienna Khan, the current leader of the White Fang, to ensure his loyalty to her. Adam arranged the meeting and Salem praises his actions as showing his loyalty to her cause. On Ilia Amitola's scroll, there's files showing that Adam actually plans to overthrow Khan and take over the White Fang as well destroy Haven Academy as well.

Blake describes him as feeling completely justified in how he went about making the world a better place. However, his vision for a perfect future did not include everyone, and Blake began to believe that Adam himself was becoming a monster in the process of trying to obtain it. Unlike Blake, he is shown to have little regard for the lives of innocent people, as he planned to blow up the train with everyone on board.

In "Beginning of the End", he takes his cause, and the lives of his underlings seriously, rejecting Cinder Fall's initial offer of an alliance, citing the unnecessary risk of dying for a human cause. It is also hinted that he dislikes Huntsmen, sardonically stating she could have gone to one who strayed from their 'righteous path'.

In "Heroes and Monsters", Adam's ruthless personality comes to light. He is revealed to be a cruel, sadistic, bitter and vengeful man who will not let anyone or anything stop him from dispensing his twisted idea of justice upon humanity and the world. He appears to take great pleasure in tormenting Blake, taunting her by calling her "darling" or "my love" and ultimately promising to destroy everything she loves as penance for her betrayal of the White Fang and, by extension, him. He exhibits extremely possessive and violent behavior.

He is also merciless towards his enemies, slicing off Yang Xiao Long's arm with ease when she rushes him and even attempting to decapitate Blake when she appeared to stand between him and a crippled Yang.

Adam's abilities and skills seem to be on par with that of a highly skilled Huntsmen. He is adept in swordsmanship, quickly cutting through Atlesian Knight-130s with ease. He has a preference towards the usage of "Iaido", a method in Japanese sword fighting that involves quickly unsheathing for a rapid attack and then sheathing again.

He has been shown in the trailer to be able to slash at enemies that are seemingly out of his blade's range, implying that he either moved there and back quickly or somehow extended the range of his blade. When he used Wilt to open the train car roof hatch, he moved so quickly that his strike was almost invisible to the human eye.

He will also occasionally use Blush for ranged attacks in conjunction with Wilt. Furthermore, Adam's speed is shown to enable him to deflect numerous bullets in rapid succession with Wilt and Blush. Like Blake, Adam appears to have advanced endurance, showing no signs of fatigue during an extended battle.

Adam is able to absorb or block the energy from an enemy attack and re-emit it again, usually with his sword. When absorbing attacks or shortly before striking back, the details on his body appear to glow red. When he attacks, the color appears to drain from the world and everything turns red and black. This move apparently requires some preparation, as he tells Blake to buy him some time before he is able to perform it. When he uses this ability, red rose petals are shown floating in the air, symbolizing his theme of "wilt". In "Heroes and Monsters", his first strike against Yang is so powerful that it both breaks through her Aura and completely severs her arm, all in a single hit.

Retrieved from "https://characters.fandom.com/wiki/Adam_Taurus?oldid=139035"
Community content is available under CC-BY-SA unless otherwise noted.