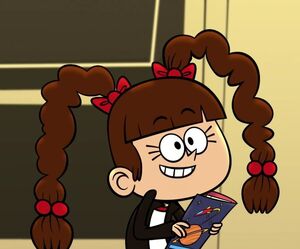 Abigail "Abby" Felt is a supporting character of Atomic Puppet (Series)'. She is the sister of Joey Felt, a daughter of Vivian Felt and Phil Felt.

Abby appears short, and has long brown hair, which has two long pigtails and has dark velvet red bows and brarettes, and wears a dark brown jacket with a white shirt on the inside, a light navy blue jean skirt, and red and white sneakers.

Abby is Joey’s younger sister and an innocent mix of both her Mom and Dad. She has sweet and caring moments with Joey, but she's also not opposed to calling him a dork if he's acting or dressing like one like in Atomic Goo, deep down, she still cares for Joey as a big brother, regardless of the situation as such.

Retrieved from "https://characters.fandom.com/wiki/Abby_Felt?oldid=60484"
Community content is available under CC-BY-SA unless otherwise noted.